It was a successful day for Stal Hendrix at the Central Mare Inspection of KWPN Limburg. From the first crop of Cape Coral RBF Z, his daugther Lilly HX was chosen as champion, and Lusina finished second. In addition, two more mares from Stal Hendrix are invited for the National Mare Show in Ermelo, and a foal by Kempinski won the foal championship. 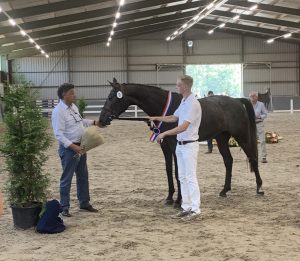 Complete mares
The half-sister of Kardinaal HX, the Entertainer-mare Leader HX (ds.Karandasj), was placed third in this final of the three-year-old mares. And to complete the success, the Gaspahr mare Lebora (ds.Diarado) finished fourth. This appealing mare comes from the first crop of Gaspahr and jumped to 85 points at the mare inspection. “If you start as a stallion owner, you know it’s going to be a long way. It is great to see that we are apparently on the right track. Both with our own breeding and with our stallions. Cape Coral RBF Z and Gaspahr have both shown good mares from their first crop. If we have faith in a stallion, we will cover our best mares. It is great to see that a combination of Cape Coral RBF Z with the World Cup mare Melisimo has produced the champion mare”, reacts Paul Hendrix. “From the first crop of Don Diablo HX and Entertainer, we also showed several mares at the mare inspections, and that worked out well. Don Diablo HX produced two champion mares, who both performed excellent at the national mare show as well, and it is good to see that our younger generation of stallions are also able to present themselves well here!” 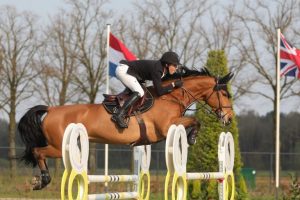 GCT-GP victory for Bustique son
From his first foals, the young stallion Kempinski sired the champion foal of Limburg. The modern Opinski B is owned by breeders Kai and Lincy Bruynen and made the best impression of all show jumping bred foals. He has a great canter and is selected for the Limburg Foal Auction. In the evening another offspring of a stallion from Stal Hendrix provided great advertising. Under Maikel van der Vleuten, the just nine-year-old Bustique son Beauville Z jumped to the victory in the Global Champions Tour Grand Prix of Monaco.