Last night the third auction on the auction platform of Stal Hendrix has been successfully completed. Two very striking offspring of Jacadello, which were sold for 50,000 and 48,000 euros, turned out to be the best paid horses within this promising collection of three-year-olds. The international interest for the horses in the HX Auctions had led to an average price of almost 30,000 euros. 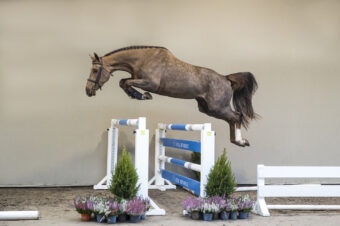 Paul Hendrix rightly speaks of a surprisingly successful auction. Together with son Michel and nephew Timothy Hendrix, he selected ten top talents from his own breeding and rearing. The Jacadello mare Neeltje (ds.Lupicor) leaves for Switzerland for 50,000 euros and the same destination has the Jacadello mare Nadine-L (ds.Bustique) for 48,000 euros. “It is great that we were able to offer two outstanding horses out of the first crop of Jacadello. There was a lot of interest in these two mares, as well as in the other horses in the auction. It has once again become clear that clients are willing to pay well for quality.”

Successful first year
From Stal Hendrix’s own breeding farm, the Ultimo van ter Moude mare Normandy HX (ds.Entertainer) fetched a good price with 34,000 euros. Just like the Cape Coral RBF Z mare Napoliena K (ds.Eurocommerce Naples), which was sold for 44,000 euros, she will remain in the Netherlands. Other horses have been sold to Sweden, the United States and Germany. “All ten horses have ended up in good hands and we are really looking forward to see their developments in the future. We’ve had a fantastic first year with HX Auctions and it’s great to close the third auction in one year in such a way. Our auction platform has therefore positioned itself well in the market and that gives us good hope for the future,” concludes Paul Hendrix.