Last weekend our riders went to the national Concours Hippique Midden Limburg at Equestrian Centre De Peelbergen. In the 1.50m Grand Prix, Sophie Hinners with Vittorio 8 and Michel Hendrix with the stallion Don Diablo HX ended up second and third. In Wellington the Stal Hendrix-reference Carmen won the 2* -GP. 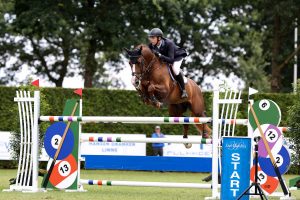 The Grand Prix at 1.50m level was a great ending of the 26th edition of Concours Hippique Midden-Limburg, which has been held in Kronenberg since 2016. Twelve combinations qualified for the jump-off and Rob Heijligers took the victory with FFW88. His clear jump-off was just a bit faster than Stal Hendrix-rider Sophie Hinners aboard the Valentino-son Vittorio 8, who were just a bit faster than Michel Hendrix and the stallion Don Diablo HX (s.Vittorio). Michel did receive the prize for best rider of the competition. He earned several good results, including a second place on the first day in the 1.40m class with Don Diablo HX.

GP victory
In Wellington the Whitesnake mare Carmen made good advertisement for Stal Hendrix. This twelve-year-old mare has been sold by Stal Hendrix to Laura Kraut, and with the only 18-year-old Samantha Cohen she won the 50,000 Dollar Griffis Residential Grand Prix (1.45m) of CSI2* at the Winter Equestrian Festival. With the student of Laura Kraut, the careful mare jumped to the victory in their first Grand Prix.