A word of thanks to Ian Millar

Today it was announced that ten-time Olympic rider Ian Millar has ended his illustrious equestrian career. A great moment to reflect on the many successes and good cooperation between Ian Millar and Stal Hendrix. A commitment that has proved to be very valuable not only for business, but also for private life, and which the new generation Millar and Hendrix are ​​pleased to continue. 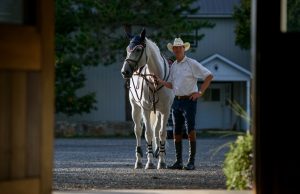 The long-standing relationship with Stal Hendrix and Ian Millar started after a meeting at Spruce Meadows in 1983. “I met Emile there and he said that I had to let him know when I was in Europe, and should definitely stop by Stal Hendrix. So when I was in Belgium in the fall of 1983, I told Emile that I had some spare time. Emile told me: ‘I know a horse that you need to see. You’ll either like him or dislike him, since he’s a bit unusual.’ That horse was Big Ben and I immediately had a special feeling about him, and I became his owner within 45 minutes”, said Ian Millar in the 2017 DSHS Magazine. The Etratat son achieved amazing results and that first purchase at Stal Hendrix laid a solid foundation for a long-lasting collaboration. The following year ‘Captain Canada’ Ian Millar and Big Ben competed in the Los Angeles Olympic Games, in 1987 they won individual and team gold at the Pan American Games in Indianapolis and in 1988 and 1992 Big Ben was also the partner of Ian Millar on the Olympics. Other highlights of their career include the victory in the World Cup Final in Gothenburg in 1989 and the Grand Prix of Spruce Meadows in 1991.

More than 35 years of friendship
Big Ben kicked off an excellent cooperation and friendship. “Big Ben has brought both Ian and Stal Hendrix a lot. Thanks to that reference, we have been able to expand our business worldwide, and even international TV teams came to our stable to make reportages about Big Ben. In total Ian participated in seven (!) Olympic Games with horses that he found and purchased in our stable”, says Paul Hendrix. “In addition to Big Ben, these are Dorincord (Sydney 2000), Promise Me (Athens 2004), In Style (Hong Kong 2008 – team silver) and Star Power (London 2012). The growth of Stal Hendrix has been related to the flourishing career of Ian. It even happened several times that the entire Canadian team was competing with horses that they had bought at Stal Hendrix. Then I think of riders like Jill Henselwood, Beth Underhill, Yann Candele and Laura Balisky. We have built a very intensive relationship with Ian, and now also with his children Jonathon and Amy. Ian has meant a lot to our company and on a personal level. We are very grateful to him for his trust and friendship, and we are happy to continue this with his children as well. ”