Various horses that were sold to America by or through Stal Hendrix, have performed well in the national Grand Prix of the Paso Park Fall Classic. Hillary Ridland showed to be runner-up with Wonder Kid. This Indoctro offspring has won the Dutch Championship for six-year-olds under the name Gloed with Timothy Hendrix in 2017. 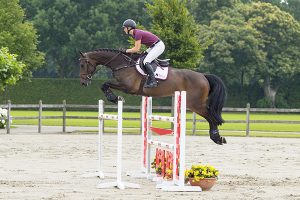 The Indoctro son Wonder Kid is successful in the international classes with rider Hillary Ridland since the beginning of this year. In 2017 he was one of the outliers in the Dutch Sport Horse Sales, after which he was purchased by Mary and Carole Looke. In the $40,000 Grand Prix at the Paso Robles Horse Park, Wonder Kid jumped to the second place with Hillary Ridland. Dakoda Mower also performed well with a horse that comes from Stal Hendrix, namely the Diamant de Semilly son Duanda of the Lowlands Z. This gelding was previously successful in international classes with Oda Charlotte Lyngvaer. Mower and Duanda referred Mary Looke to the fifth place. She was riding the third Stal Hendrix reference in the top of this Grand Prix, the very experienced and successful Contendro I son Conthendrix.