Many good showjumpers performed well today during the third show of the Stal Hendrix competition, which was held in Meerlo. Alfred RG (s.Agana van het Gerendal Z) achieved the highest points in the four-year-olds class under Jada Golsteijn, in the other age classes the offspring of Edinburgh and Eldorado van de Zeshoek took the first prizes. The finals are scheduled at the Peelbergen on the 22nd of July. 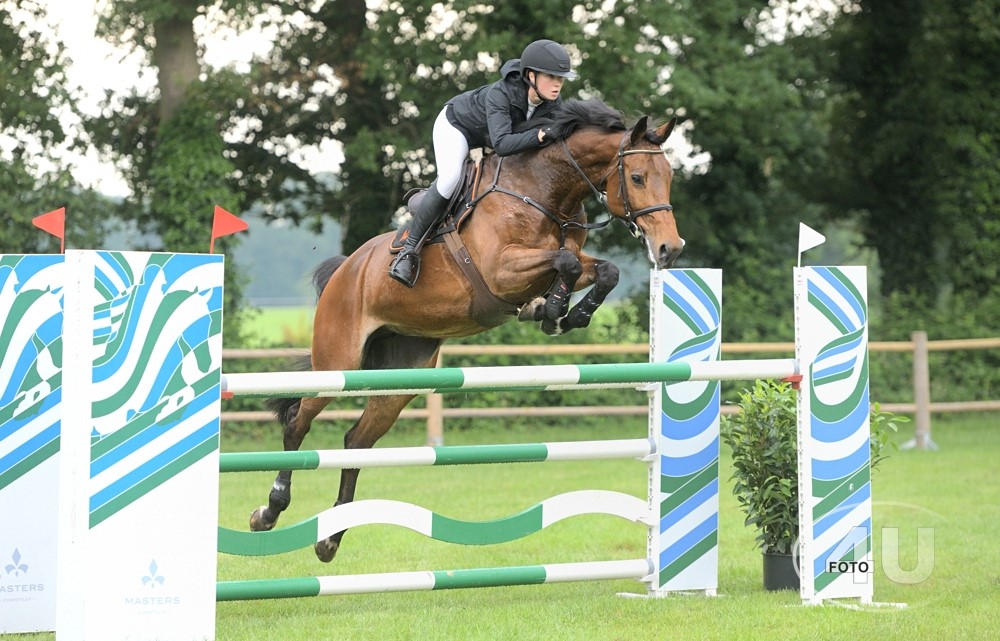 The good jumping Alfred RG (s.Agana van het Gerendal Z, breeder Rob Gradussen) was victorious in the four-year-olds class under Jada Golsteijn. The competition was hot on his heels, because with his 7.6 for jumping and 8.0 for rideability, he was only one-tenth ahead of Nino Nacho RX (s.Conthargos) of breeder Stal Hendrix and Klytsjko van de Heffinck (s.Kassander van ‘t Roosakker) under Rob Heijligers, who finished third, was again one-tenth away. The second placed Nino Nacho HX under Ivo Steeghs was the horse with the highest points for jumping. Judges Carlos Pinto and Desiree Johnson awarded this quality mare a 7.8. “In general, we had a very good group of horses, very talented. I think some of our best horses had a bit problems with the course. Because it was a lot of course for four-year-old ones. But they had all good experiences and I think they came out good. The top-three horses were all very nice and going to have a job in this industry. The winner is a scopey, beautiful horse that went well and all three horses were very talented” explained Desiree Johnson. Winner Alfred RG was placed third in the previous leg in Sevenum but missed the first leg of the Stal Hendrix-competition. In the lead after three shows goes Nantucket (s.Cape Coral RBF Z), followed by Klytsjko van de Heffinck and Safari van het Reukenis (s.Flipper d’Elle).

Classification
After a third place during the selection competition in Sevenum, Mariekske (s.Edinburgh, breeder Jos Althuyzen) now took the victory. Under Johan Bergs, this mare delivered the best result in the five-year-olds class in Meerlo. Emile Tacken was the runner-up with Marizona (s.Grandorado TN), while Alexander Davis with Mike de Muze (s.Falaise de Muze) set the third result. Last-mentioned already won the first show of this competition and is therefore going in the lead, followed by Oxana by Diamant Z (s.Ogano Sitte) and Menno H (s.Stakkato Gold). In the six-year-olds class, La Luna B (by Eldorado van de Zeshoek) and Renee de Weert proved to be unbeatable. This strengthens her position in this competition, after she finished in second place last time and there is only one leg to go. La Nulana K (s.Douglas) ridden by Manon Hees also performed well in the Stal Hendrix competition in Meerlo. After a third place last time she now ended up second, while Lucky Special (s.Cardento) with Rob Heijligers took the third prize. After three legs, the Entertainer son Lambrusco is placed second and the Kannan offspring Kontiki VK Z third.

Finals at De Peelbergen
Due to the cancellation of Jumping Peel&Maas, the organization has found an alternative location for the finals. The finals of the Stal Hendrix competition will therefore be organized at the Peelbergen Equestrian Center on Friday the 22nd of July, during an international competition.