KWPN-approved Kempinski continues career in US

In recent months Stal Hendrix has purchased several new stallions for sport and breeding, such as the French champion Farzack des Abbayes and the KWPN performance champion Lambada Shake AG. But also in terms of sales, Stal Hendrix keeps on going. The KWPN-approved stallion Kempinski (s.Darco) will continue his sporting career in America, where a great future awaits him as a hunter. 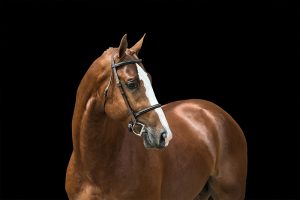 The five-years-old Kempinski, bred by Jan Hoppenbrouwers, has proven jumping genes as a direct son of the legendary Darco and a descendant of the well-known Jolaris damline. He was purchased at the KWPN Stallion Show by Stal Hendrix and then passed the performance test with 82.5 points, including a 9 for his great rideability. In the Stal Hendrix competition he subsequently showed his qualities under Tim van den Oetelaar and Kempinski also made a good impression with his first crop of foals. “His outstanding foal report doesn’t came as a surprise. We really look forward to the further developments of his offspring. For the sport there was great interest for Kempinski and then you have to make a choice at some point. Especially because of the new young stallions we have available for breeding now”, says Paul Hendrix. “Our good friend Emil Spadone was convinced of his talent and possibilities as a hunter and through him we recently sold Kempinski to the United States. His frozen semen remains available at Stal Hendrix.”