Stal Hendrix horses jumped into the spotlights at international competitions this weekend. Under Pieter Devos the Stal Hendrix bred Apart won the World Cup of Stuttgart and at CSI2* De Peelbergen it was Abdel Saïd who ended up second aboard the via Stal Hendrix sold mare Chakira. Besides this, the stallion Cape Coral RBF Z made a successful debut at this show with his new rider. 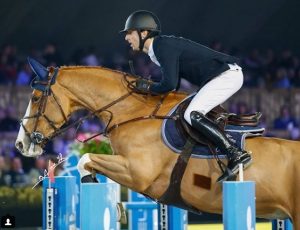 The victory in the Longines FEI World Cup of the Stuttgart German Masters was claimed by Pieter Devos riding his top mount Apart. Thirteen years ago this striking chestnut sired by Larino, was born at the stables of the Hendrix family and in 2009 he was sold at the Dutch Sport Horse Sales. Last year, his outstanding achievements were already a reason to proclaim him as DSHS Horse of the Year. Today he added a remarkable performance to his record in the World Cup of Stuttgart. With a gap of more than seven seconds (!) they took the victory, and received the keys of a new Mercedes with a value of 80,000 euros.

Great debut
The Grand Prix of CSI2* De Peelbergen (1.45/1.50m) and Abdel Saïd turned out to be runner-up riding the Sheraton mare Chakira, who was sold via Stal Hendrix. Stal Hendrix-rider Sophie Hinners also performed well in this main class. A double clear ride with Vittorio 8 was good for the fifth prize. At the same competition, the stallion Cape Coral RBF Z (s.Cornet Obolensky) debuted with his new rider Michel Hendrix. The outstanding stallion was trained by Pieter Keunen for years and jumped a double clear round in the 1.35/1.40m final with Michel today. They were placed sixth s0 that gives good hope for the future!