Almost two years ago the Swedish rider Fredrik Spetz purchased Dustin at Stal Hendrix. The gelding was trained by Michel and Timothy Hendrix up to 1.40m level. Fredrik and Dustin have already achieved many great results and today they could add a fourth place in the 1.60m Grand Prix of CSIO3* Drammen to their record. 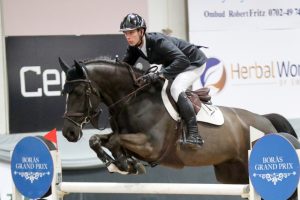 Dustin (s.Ustinov) was bred by Jurgen van Leur and Pieter Schouten. As a young horse, this representative of the well-known Sina damline, came under the saddle of Michel Hendrix, who trained him up to 1.40m level. Dustin continued his career with Timothy and was sold in the summer of 2017, shortly after a 1.40m victory in Knokke, to Fredrik Spetz. The Swedish rider purchased the For Pleasure mare Janou in the same time, with whom he also achieved good results. In February this year, Fredrik and Dustin already won the 1.50m class at CSI3* Lillestrom, and they finished sixth in the Grand Prix of that show. In one of their first 1.60m classes, the Grand Prix of CSIO3* Drammen, they achieved an excellent result today. With a double clear result, they were placed fourth in this Norwegian top class.