A party was celebrated today at the Scotland AI Service in Winchburg – West Lothian. Our stallion Hemmingway turned 30 years and the Dutchman Ben Wentink and his team made sure it didn’t go unnoticed. ‘Thirty and Flirty’ was on his birthday sash.

Hemmingway (Leandro x Romantiker) was born on the 29th of March in 1989 in Beschendorf. As a three-year-old he was approved for the KWPN and scored 9’s for his character and training report. As a six and seven-year-old he competed at the World Championships for Young Showjumpers in Lanaken and competed very successfully up to 1.40 m level internationally before he was retired sound to stud. For years, Hemmingway has been at stud at Stal Hendrix and for the last ten years he has been staying at Scotland AI Service, where he is still used for breeding. He has sired international show jumpers such as Mianta (Cannan Solem), Markant (Chris Pratt), Nicky (Mario Piasecki) and Noberlina (Eric Lamaze). He is also sire of several Grand Prix dressage horses including Steffen Peters’s Prince and several successful international eventers such as Midas Mulligan (Michael Pollard). Stal Hendrix has still frozen semen available of this proven progenitor. 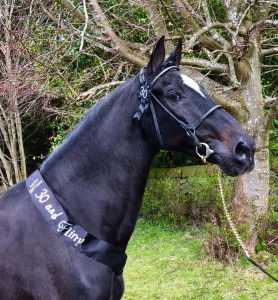 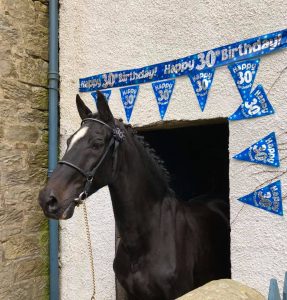