After a three-year stay in the United States, the Grand Prix stallion Bustique has returned to Stal Hendrix. The oldest offspring of this Indoctro son are performing very well up to 1.45/1.50m level, and thus the circle is complete. From 2019 the KWPN approved stallion is available for breeding at Stal Hendrix. 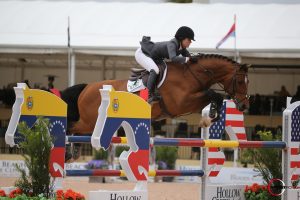 Circle around
“When the possibility arose to get Bustique back for breeding, we did not have to think for one second. He has proven himself as a show jumper and his oldest offspring are following in his footsteps on Grand Prix level. Riders are very positive about his offspring and that is always a good indicator. Bustique is an asset for breeding and we are happy to have him back at our stable”, says Paul Hendrix. “He is proving to be one of the best breeding stallions of his generation and this is also apparent from his third place in the HorseTelex sire ranking.” As a three-year old, this full brother to Yann Candele’s Grand Prix mount Mustique was elected vice champion at the KWPN stallion approvals, and he earned 81 points in the stallion performance test. After claiming several great results in the stallion competitions and young horse competitions, Bustique ended up second in the VHO Trophy at the KWPN Stallion Show in 2014 and won multiple international prizes with Michel Hendrix in 1.45/1.50m classes. In 2013 his daughter Footlose HX (ds.Concorde), out of his first crop of foals, was elected Dutch Champion Mare in Ermelo.