Also the fourth leg of the Stal Hendrix competition was dominated by quality show jumpers. With a second victory, La Luna B (s.Eldorado van de Zeshoek) under Renee de Weert secured the leading position in the classification towards the final. In the 4-year-olds class the Aganix du Seigneur mare Ariane under Don Willemsen received the highest marks and in the 5-year-olds class the first prize went to Marizona (s.Grandorado TN) under Emile Tacken. The final is scheduled for July the 22nd. 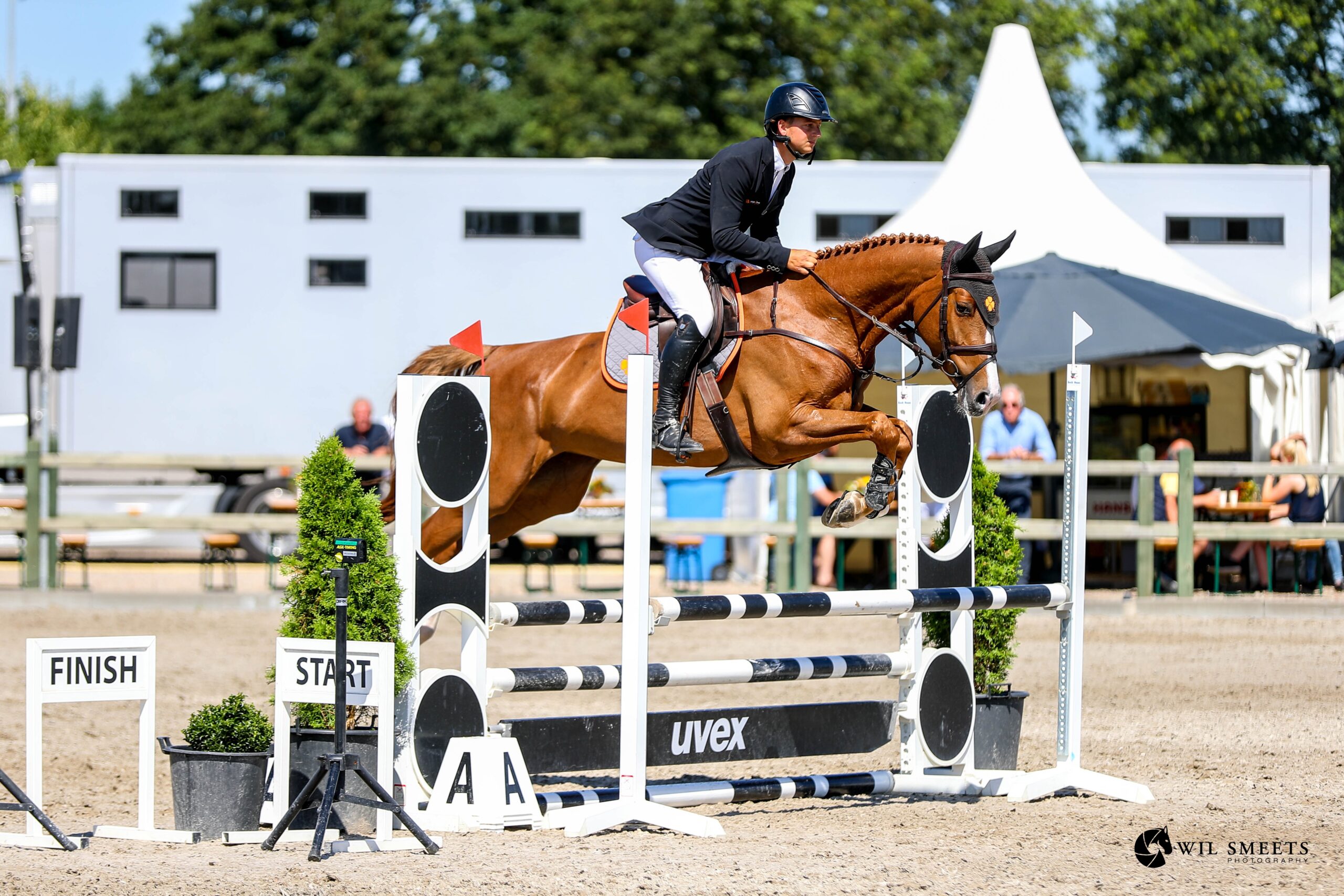 Eric van der Vleuten and KWPN inspector Stan Creemers judged the four-year-olds in Reuver. They gave an 8.1 for jumping and an 8.3 for rideability to winner Ariane (s.Aganix du Seigneur) under Don Willemsen. “This horse is already very nice to ride and jumped in a good way. This made her the most complete horse for us today”, responds Van der Vleuten. The highest points for jumping went to Nadia HX (Valmy de la Lande x Bustique, breeder Stal Hendrix) under Ivo Steeghs. This mare received an 8.2 and for the rideability an 7.6. “This horse jumped very well, with a lot of quality and potential for the future. The rideability was not yet optimal and that cost some points, but it is certainly a promising horse.” With twice an 8, Jackpot (s.Jenson van ‘t Meulenhof) finished third under Rob Heijligers. “This horse also showed good things. He jumps with a lot of scope, seems careful and has good rideability.” In the classification for the final, Klytsjko van de Heffinck (s.Kassander van ‘t Roosakker) takes the lead under Rob Heijligers, followed by Nantucket (s.Cape Coral RBF Z) under Micky van den Oetelaar and Surprise-K van Kattenheye (s.Untouchable) under Johan Bergs. The best thirty combinations are allowed to compete in the final on Friday the 22nd of July at the Peelbergen Equestrian Center.

In the lead
The best result in the five-year-olds class was achieved by Marizona (s.Grandorado TN) under Emile Tacken, who was runner-up in the previous leg. In Reuver they crossed the finish line just one-hundredth of a second earlier than Oxana by Diamant Z (s.Ogano Sitte) under Rob Heijligers, who is in the lead for the final together with Mike de Muze (s.Falaise de Muse) under Alexander Davis. The Jaguar van Paemel mare Jinfinity DML Z jumped to the third result in the five-year-old class under Britt Driessen in Reuver. Renee de Weert took the victory in the six-year-olds class with La Luna B (s.Eldorado van de Zeshoek), just like they did in Meerlo. This competitive duo ended up second in Sevenum, which means that they are in the lead towards the final with a minimum number of four points. Second in this last selection competition was Leike (s.Arezzo VDL) ridden by John Driessen, followed by Hot Shot (s.Hot Spot) ridden by Robby Krowoza. The KWPN approved stallion Lambrusco (s.Entertainer) and his breeder Pieter Keunen are now in second place in the rankings, just ahead of Liletto (s.Harley VDL) ridden by Kristian Houwen.